This week my plot and flat are in the safe hands of others to water and check on. We’ve decamped to Italy, to stay with Him Indoors’ family. Castelleale is just outside San Clemente, near Rimini, with fantastic views to the sea in the east and San Marino in the west. The house is a working artist’s studio, built on a hill in the remains of a medieval bishopric – which means it’s beautiful and wonderfully eclectic but also thankfully has ridiculously thick walls to keep out a lot of the scorching heat. I wilt dramatically in temperatures above about 25C and here it’s over 30C. 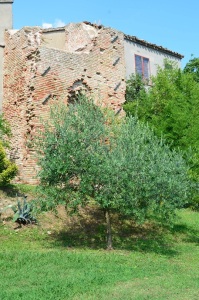 The garden’s huge and gorgeous, with 3 ponds, a veggie garden as well as the almost compulsory pomegranate, bay, fig, persimmon and olive trees. There are edibles I’ve never seen growing before. Out behind the lean-to is a large caper bush growing in a crack in the ruins.

The flowers are stunning, but only last a day. Each morning I fight out through the clouds of mosquitoes (who laugh in the face of Avon Skin So Soft) to pick caper buds, which are then stuffed into a jar of salt kept under the sink. The bush is a fussy grower – Paolo’s tried cuttings and seeds pushed into other cracks in the wall, but this spot under a mammoth fig tree is the only place it wants to be. 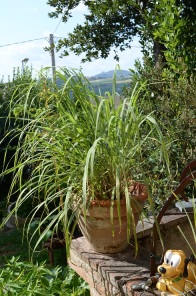 With all the sun and heat everything grows bigger here – the 5ft potted aubergine by the kitchen door, fig trees taller than the house, and, sitting on the well wall, guarded by a small plastic Pluto, a massive pot of lemongrass. Each time I look at it I feel faintly green.

I’ve tried 3 packets of lemongrass seed this year and have been met with abject failure. The few seedlings I got rapidly shuffled off their mortal coils. So on my traditional seed packet ramraid at the local garden centre (huge packets for about £1 each) I was overjoyed to see some stocky large plants for just €4.50. And even more overjoyed that Paolo insisted on getting them for me as a present. Packing them will be fun…(you can bring plants in from the EU, details are here)

ing we found in this garden 3 years ago. It’s growing at a slowish rate of knots and I think it could do with a companion. The trees in the garden centre were all way too big for me to stuff into my suitcase: step forward Plan B. I know it’s the wrong time of year to take cuttings, but some of Paolo’s trees have small forests of suckers growing enthusiastically around their trunks, which need to come off anyway. I’ve been eyeing up this tree in particular, just outside the kitchen and reliably loaded with fruit every year. So I’m coming home with an armful of twigs and a hopeful expression. It’s always worth trying.