There have been unmistakeable signs – berries on the ground and then the surreptitious waddle-past, eyeing up the potential for another raid. Word was going back to Pigeon HQ that goosegogs and currants were carelessly unattended.

I’ve been putting off putting up the cages. I’d fondly imagined having the walk-in done by now. The ground had become rock-hard and not conducive to whanging in stakes & pegs. All the netting was at the bottom of a ‘storage dalek’ (my shed being tidy has consequences!). Plus lots of the gooseberries fell foul of the frost and I just didn’t notice how quickly the redcurrants in particular are maturing. Watching a pigeon crash noisily out of the bushes has spurred me into action. They are up now, less straight than usual through lack of time, and higher than normal because of all the tall potted bushes I have shoved in to keep the planted bushes company.

They aren’t expensive, bar the netting. Just a few dahlia stakes cut to height, painted for pretty and sturdified with bamboos. The net is cut to fit the bed, and it lasts for years as long as the wretched mice don’t chew their way in. At which point it looks a bit more cobbled as I mend the holes with polytwine.

I am also doing that thing most allotmenteers dread in peak growing season. I am Going Away. Spectacularly mistimed given the amount of temporary pots I am running in the greenhouse and on the plots. Him Indoors has promised to keep an eye on the balcony…he’s snoozing while I type this and can’t hear me creeping out with more pots. Wonderful Lionel is taking care of pots on plots, and even he blenched slightly at the sight of them all.

I went up last night to save some of the outside smaller ones from drowning in their crate after a day of rain. Slugs and snails hadn’t found them, but they had found nearly everything else. Apart from the labels, there is no sign of the Potimarron squashes I had put out, and the newly hatched dwarf beans had an extra wrapping of brown slime. I had no time for my preferred method of dispatch (secateurs) and had to settle for scattering some ferrus pellets and lobbing as many as possible into the communal pond.

There are very few in the greenhouse (currently). And none on the strawberries, which are ripening happily. I’ve left a large handful at home for Him Indoors as a reward for driving me to the airport in a car which isn’t entirely waterproof. 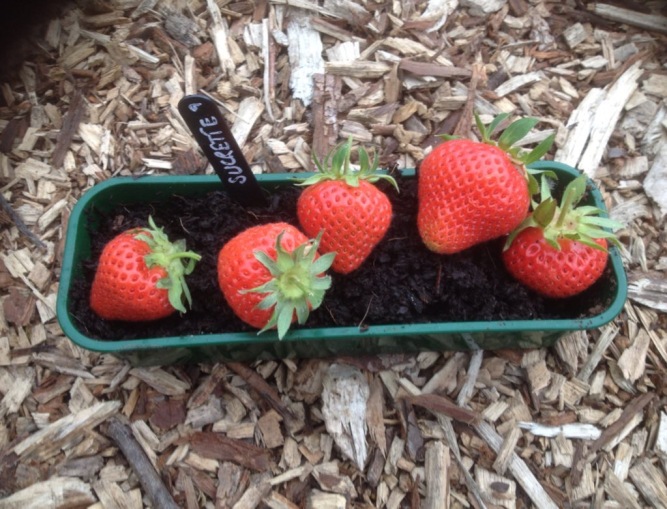