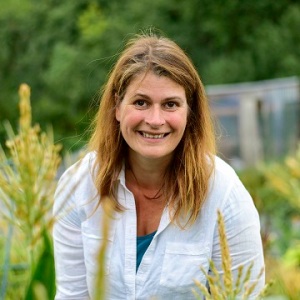 I’ve always been interested in growing fruit and veg, but have never had the luxury of a garden to try it. Allotments in overcrowded suburbia are also hard to come by. It took just over 5 years for my name to make it to the top of my local site’s list. In March 2012 I got a call to say an overgrown half plot could be mine and I started growing fruit and veg for the first time.

I spent the first year essentially messing about, seeing whether this would be something I could do and would want to do in practice, not just in my head. I grew small amounts of a lot of things and became thoroughly hooked. It has been an incredibly steep learning curve, and I am very grateful for all the help and support from more experienced growers on my site and on allotment forums who have patiently answered my questions.

By March 2015 I had made it to the top of the waiting list again. I now have a second half plot, which I share with a friend. This is what they looked like when I got them: 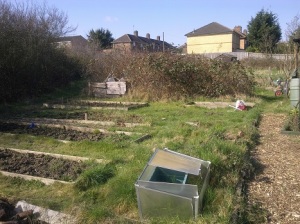 Seed-saving and unusual edibles have quickly become a bit of a ‘thing’. I’ve turned into a seedaholic with more than a passing fondness for squashes. I’ve started a couple of seed circles (most recently a Twitter one which you can find via #seedcircle16), belong to a few others and am one of the Heritage Seed Library’s Seed Guardians.

This site is a collection of my experiences in learning to grow fruit and vegetables. I hope you enjoy it.