Kiwano, aka African Horned Cucumber, aka Jelly Melon, probably aka other things too. (Cucumis metuliferus) 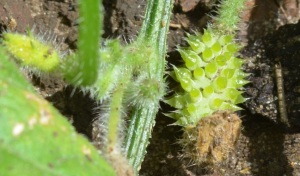 These are fun to grow – nothing attacks them once they are past seedling stage and the fruits look really alien. They are native to southern Africa and I have never seen them on market stalls or in shops in the UK. I did spot one in a fruit basket in The Force Awakens though…

One warning, like achocha the plants are thugs. Tendrils seem to multiply overnight and they need space. If you don’t make space for them, they will just invade. But they climb happily, and are easily moved – though wear gloves, the tendrils are spiny.

Down here in the balmy south they are perfectly happy growing outdoors – further north they might need some sort of insect-permeable protection to fruit successfully. I started mine off in April at home, gave it some protection in the greenhouse for a while and moved it out to a final position in late June – it could probably have gone out earlier in May and I might have had an even larger crop. I didn’t provide any additional feed bar a handful of chicken pellets on planting out, but I did keep it well-watered, which it seemed to thrive on. 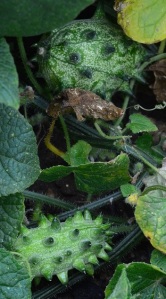 The plants have male and female flowers, and, despite climbing to 4ft high, all the fruits formed near or at ground level. When I say ‘all’, my one plant formed 10 fruits of varying size, from apple to mango as a comparison, and that was in a cold dry year. Kiwano fruits have particularly unforgiving spikes, but the skin isn’t hard to cut into. Inside the seeds each have a gelatinous coating, a bit like passion fruit. Unripe it tastes like limey cucumber and the seeds are soft, which makes it easy to eat. Not unpleasant.

Kiwanos ripen slowly from green to orange. If it’s getting late in the season by this point, there are frosts on the horizon or the plant has mostly died, (or all three), don’t worry, the fruits will ripen off the plant. And they ripen more quickly in the warmth of a house and/or next to a banana.

Ripe fruit have a much darker green centre. The brighter orange the skin, the sweeter the flavour. The inside is easy to spoon out but the seeds are hard, sharp and inedible. For me, juicing worked much better. Plus then I have the seeds for future sowing. The taste is, well, odd. Compared to the unripe fruit, it’s become much more fruity, a bit like a tart banana-y cucumber. The flavour is enhanced when it’s chilled. I think I like it…would also work well as a cocktail base, or possibly as a curd or sorbet. Time to go looking on the internet for what to do with the others…

Note to add: the above is from 2015. My 2016 kiwano-growing was abysmal thanks to slugs and cool temperatures. Fingers crossed for 2017.