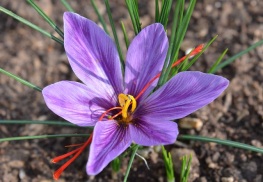 When I started with the allotment I didn’t realise you could grow saffron here. I’d always thought of it as a wildly expensive spice from hot, dry places, rather than a crop that was grown in the UK for hundreds of years. Given that saffron poached pears are so delicious, I thought it might be interesting to try it on the allotment. Internet wisdom says saffron only needs moving and dividing every 4 years, which also fits well with a strawberry rotation, though you can lift and divide each year. I’m pretty curious and usually can’t resist seeing what I have, plus the new bed has a nasty bindweed & couch grass habit I’d like to keep at bay.

Saffron needs well-drained, well-fed soil. It’s used to dry, hot summers and cold winters. And it needs a position with a good amount of sun in the autumn when it flowers. It flowers over a 2-4 week period between September and November – this fluctuates a bit because flowering is triggered by Autumn’s falling temperatures and increased rain. In 2015 my first flower appeared on 26 September, in 2016 it was well into October and in 2017 it was 21 September.

I started with 60 fat corms from Suttons. Circumference is important – 7cm and above should guarantee flowering in the first year. Larger corms (and you can get some really big ones when you grow your own) will produce up to 4 flowers. Planting distance and depth is 10-15cm each way – received wisdom is that the deeper planted corms produce more flowers over corm production, whereas if they are shallower they produce fewer flowers and more corms. To be honest I haven’t noticed this, but I have (until 2017) dug them all up, split them and replanted the biggest every year. My soil settles a fair amount, so while they may have started at 15cm deep, the final depth is less.

What I have seen so far is that the biggest corms (the size of a small onion) will split into a large number of smaller corms, while the smaller ones seem to devote their being into developing one huge new one and some tiddlers.

The first indication that saffron is on the move is a white spike and threadlike leaves. After that you need to keep a close eye out for flowers appearing. There are usually 3 red stigmas in each flower, and they need to be hand-picked when the flower has just opened. Even if it’s raining.

There is no mechanised way of doing this, so you can see why it’s so expensive. Use tweezers, your fingers or pick the whole flower, whichever works best for you. The stigmas wither quite quickly and the flowers only last about 3 days – again, less if it’s raining or slugs find them, which is why it’s important to check each morning. Bear in mind saffron was used as a dye – the orange stains can be hard to get off your skin/out of clothes.

I dry my saffron between sheets of kitchen towel, and store in the dark to stop the spice degrading. You could dry it in an oven on low with the door open, or in a dehydrator on the lowest setting, but don’t cook it!

Personally I think that saffron needs its own space to grow. I didn’t have enough ground ready when my corms arrived so half went in pots and half in a raised bed. In my first year (2014) most of the corms in pots flowered compared with only about a third of the corms in the ground. The saffron in the bed also rapidly became in the way – it needs dry soil in summer when it’s dormant so the corms don’t rot. That doesn’t work when they are in the middle of a thirsty sweetcorn and squash bed…

Lifting the corms is straightforward: wait till the foliage has completely died back, around May/June time. The corms form clusters, new daughter corms developing through the original. You can see how many corms are developing by the number of leaf clusters pushing through. Digging them up is a bit nerve-wr

acking – like spuds, you don’t want to spear any with the fork! Usually the remnant of last year’s corm, the basal plate, will have rotted away by now. If not, break them carefully away. Corms can either be replanted immediately or stored for a while covered in damp compost till space is available. I store mine for 2-3 months, June-August, with absolutely no ill effects.

Saffron multiplies very quickly – the main reason for lifting and dividing regularly. If you leave them to become congested, the corms will become smaller and smaller, which means fewer flowers and less saffron.  As an example of their reproduction in the ground, in 2014 30 corms became 127. The following year 105 corms became 477. And some of them were the size of a small onion. HUGE! In comparison, the ones in tubs were fewer in number and smaller. My conclusion is that saffron is much happier in soil than pots, at least when I am looking after it… I now use planters as nursery beds for the small corms. They can bulk up somewhere convenient and don’t take bed-space away from the larger corms. 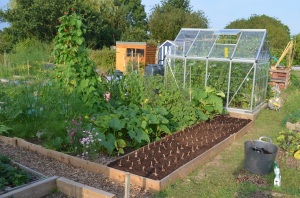 I prepped a 4m x 80cm bed on the southern side of Plot 92, based on my calculations of maybe having 100 corms. (In fact I had well over 200, so it was too small to begin with.) The southern side is the highest point (no waterlogging) and will get winter sun. 105 of the biggest corms went in the ground, which I prepped by hand-sifting to the clay subsoil just over a spit down, adding a 125L bale of MPC, most of a box of BFB, some grit and 2 barrows of rotted manure from my stash.  The remaining small corms were given away or st

ashed in tubs of compost, more to store them than with any thoughts of them flowering. (They didn’t)

After flowering the plants develop long (40cm or longer) leaves which flop on the soil and look a bit like green pony-tails. Flowering is based on the care the previous growing season, so feeding the corms post-flowering is really important. I top up with more manure and potash-rich food in late November and a little more again January/February before they start to die back, just to give them the best chance of bulking up before the next season.

And so onto yields and flavour. In the first year (2014) there was enough for a couple of risottos and a poached pear pudding. In 2015 I had 1.1g (dried weight) – which was a fantastic harvest for a second year with transplanting. Some of the larger bulbs produced 4 flowers each. There would have been slightly more, but at a key point in the flowering period there were 3 days of solid rain, which really damaged the stigmas.

In 2016 I harvested the same amount, despite now having 2 beds and double the corms. I put it down to an awful growing year resulting in later flowering coupled with some freelance work that meant I couldn’t get to the plot every morning, and am grateful for what I managed to harvest.

2017 was the first year that I didn’t lift and divide the corms, and we had a pretty decent and dry summer. It had a huge impact on yields, with a whopping 3.2g as dry weight. I won’t now be digging and splitting them again until it’s time to rotate the beds.

Saffron is usually graded for sale. The more of the yellow style, the less valuable the spice. Going by eye only, I think my saffron is somewhere between top and second grade (there are about 5) as some threads have a couple of millimetres of yellow style at the tip. Flavour-wise, as with so many edibles, homegrown is much better than shop-bought. It’s lovely. Sweeter, aromatic, and has a much more honeyed flavour, without the bitterness of the threads I’ve previously bought. I am properly hooked and am looking forward to a year of indulgence!