Mulberries are A. Mazing. And the schadenfreude-esque tale of James I ordering 10,000 trees of the wrong variety in an attempt to corner the silk trade is brilliant. But, while you can espalier them according to Ken Muir, morus nigra gets very (very) big and can take years to fruit. So I can understand the effort put into creating a smaller, faster-fruiting version.

The Charlotte Russe dwarf mulberry was launched by Suttons in early 2017 with a big blaze of publicity. It’s fully hardy, grows to about 5ft high, fruits on new and old wood (ie crops in the first year) and over a long period, plus it’s self-fertile. Sounds miraculous! The first release of plants sold like veritable hot cakes and you can’t get one now till September. So here’s my experience of growing the one I’m rather smug about ordering in January, which was also just before the price was notched up by £3.

First off, it isn’t a morus nigra, the traditional mulberry for berries in the UK. It’s a morus rotundiloba, and no, at the moment I don’t know what one of those is either. Suttons simply label it as morus, which I think is a little sloppy. Plant breeder’s rights are assigned to Hajime Matsunaga (note this press release states it only reaches 75cm in height) and Suttons are currently the only licenced vendor in the UK. Neither does it look like it’s grafted onto a rootstock – happy news for anyone who has one and who wants to take cuttings to increase their stock.

Mine arrived towards the end of February, very well packaged and in a 9cm pot but gratifyingly taller than the advertised 15cm, looking fairly unpreposessing and VERY fragile. Trust me, there’s not much give in those branches before they snap. I repotted it in peat-free compost and stuck it in the greenhouse, placing my faith in the blurb’s ‘fully hardy’ description. 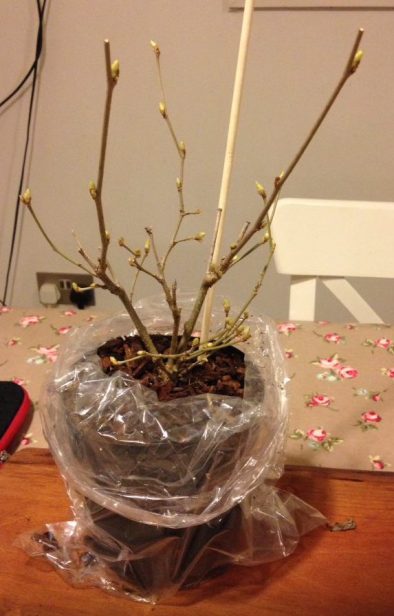 It obviously liked it there – three weeks later it had grown by 3 cm, put forth leaves and started to flower all over. Teeeny, tiny little flowers that start out looking like mini-berries and then suddenly turn hairy. By the beginning of April, which was lovely and warm, growth had increased to about 10cm in all directions and all the berries were twisty hairy things, a very miniature version of the morus nigra flowers I found on the internet. I am under no illusions that the berries will be as big as the mulberries on my sister-in-law’s tree. I imagine that they will be at best the size of a large raspberry. But if they don’t have a similar flavour I will be immensely disappointed. 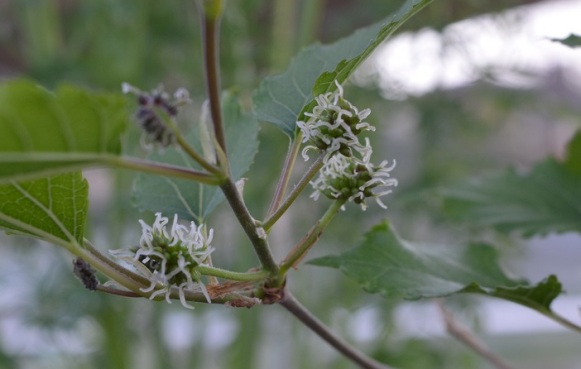 Further updates to be added later in the year.