Yesterday was a full afternoon down at the plot, and by the end of it I couldn’t move. I’ve had too much time off from digging and got soft… But at the end of it, the quince is in the ground and looks fabulous. I hope it likes its new home, and I hope (in a way) that we don’t move out of the area soon so I have to dig it up again! I didn’t have the energy to stick the comfrey in too – neither yesterday nor today.

The earth that was blocking the entrance has been bagged up and moved out of the way to the other end of the plot (Him Indoors did that, my efforts were focused on digging a gurt big ‘ole for t’tree). And the very final last few bits of wood are on the shed, including the white diamond for its mini topping out ceremony. It does look good. 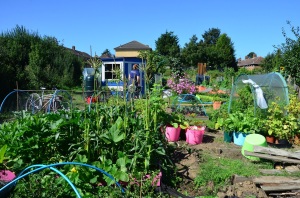 After a couple of days in Prague I was behind on the picking. French beans (the 6 plants are incredibly prolific, I’m now thinking of sidling past them/offering them to anyone walking by), tomatoes, cape gooseberries, strawberries, chillies, cucumbers, gherkins, beetroot, courgettes, golden purslane, kohlrabi were all gathered up and (mostly) taken home. Plus…..(small drumroll)….3 cobs of sweetcorn!  2 normal ones, and a confused tassel.

Cycled back via Andy and Pat’s to pick up some of this year’s allotment honey – last year’s was the best honey I’ve ever tasted, and it’s also nice to think that my plot may have contributed a bit to it.

We had allotment salad for dinner, plus that huge Black Russian tomato I’d had my eye on with some mozzarella and basil. And the sweetcorn, which was AMAZING! This week is supposed to be hot, so hopefully that will push a few more cobs to ripen and we can have more! 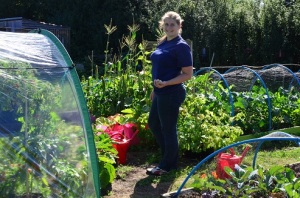 Today’s quick visit was mostly taken up by scything/trimming grass on the paths, tidying up squashes, being stung by nettles, watering both the compost heap and the rest of the plot. And picking more tomatoes. I am tucking them up in the culticave at night with the plastic door back on, to try and encourage the rest of the malingerers to turn from green to red.

Things to do include: stop putting off sorting the strawberry runners, refill the comfrey pipe and pot up the kale, fennel and winter spinach that are on the balcony. It is also slowly dawning on me that my new plot plan has no place for stuff, or more compost bins, or really the culticaves, and perhaps I need to think about a small area for those….