Back in the mists of 2012, when I started this allotmenteering lark, I pooh-poohed any suggestion of growing flowers. If it wasn’t edible, I wasn’t growing it.

I’ve got a bit more sense now. I’ve seen how much of a difference it makes to have flowers enticing insects in, particularly ones that also eat wave after wave of aphids.

And I’ve got rather used to being able to bring flowers home for the house. The Wyevale 50p sale included some really good selections, and I was given some coreopsis, larkspur and different cosmos seeds as presents so I’m going all guns blazing this year.

So right now I am sowing French marigolds, cosmos, cornflowers and cerinthe/honeywort to dot amongst the vegetables.

I sow indoors rather than a bit later outside because our local slugs are particularly fond of seedlings for breakfast. Likewise poppies, which they mow off at ground level given half a chance. I already have plenty of self-seeded love-in-the-mist, poached eggs and nasturtiums. The bumble bees went particularly nuts over the cerinthe last year – there was a small haze of busy, fluffy bums on the flowers, which were gratifyingly easy to take photos of.

I’m also having another go at sweetpeas as my first lot are unhappily lanky. I should have put them out in the greenhouse a week ago, but was too busy at work. 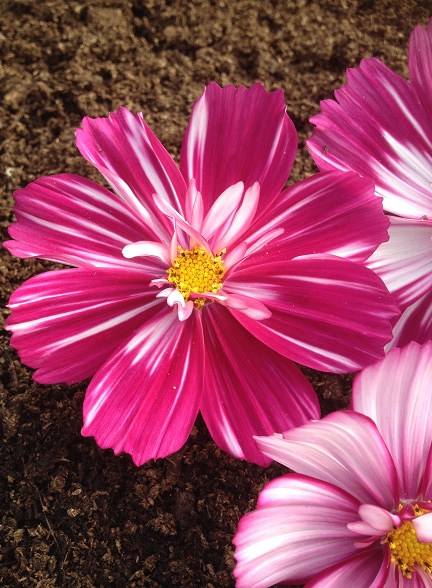