Stand by your beds!

It’s inspection time on our site. There are a few obviously abandoned plots since our last round, which is good news for the patient people on our waiting list. One of them is very near mine and has been turning itself into a prairie since about May. It’s disappointing to watch what was a pretty perfect plot revert to a mess, albeit an easily sorted one. I hope it gets looked after soon.

Inspection is as good a reason as any to make an effort to tidy up on my own space.  I’ve been given a refresher on the ins and outs of mowing and let loose with our field’s petrol mower. I was quite proud of my first go, but obviously the small mohican I’d inadvertently left down the path was intolerable. One of the other Mower Monitors has mowed again within the week…! I’ve also been ferrying bags of carpet, brambles, bindweed and blighted tomatoes to the tip to clear the rubbish pyramid I’ve been gathering all year. There is still a lot of carpet to remove – it’s heavy, damp and unwieldy. And red ants are lurking in every corner. 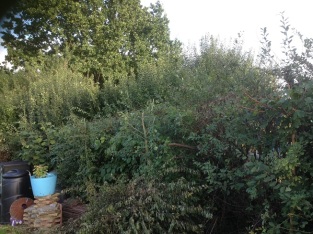 Mostly I’ve been hacking away at the hedge, to bring it down 6ft again and as a precursor to sorting out the boundary path. Many of the trees the Committee put in in early 2013 just aren’t thriving. They aren’t getting enough light or space, what with the blackthorn chucking up suckers and their roots being on the edge of a hardcore road with the added bonus of a thick orange clay pan underneath. I don’t quite know what to do about it.

I’ve also started to take stock of what’s done well and what’s been plain awful this year. In the awful column are sweetcorn and the Bolivian Giant achocha. We’ve had about 5 normal cobs, but the rest had severe pollination issues. As you can see.

The Bolivian Giant has grown everywhere – around the shed, through both the pear and the quince. But there are just 3-4 measly fruit, and these are only really double the size of the Fat Babies I’m used to growing. It might be due to the odd season this year, but they’re off the growing list for me and I’m going back to Fat Babies next year.

The weight of the quinces has led my tree to adopt a fetching leaning-tree-of-Pisa look. It was interfering with anyone actually using the path to get to their plots so I’ve built my first quince restraints and tied it to the shed guttering. I hope the screws can take it!