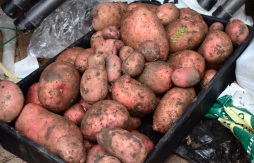 I don’t usually bother with maincrop spuds. Blight’s such a frequent visitor on our site, I usually keep to second earlies and leave it at that. This year I’ve tried 2 blight-resistant Sarpo varieties, Mira and Axona, with varying results. I only had 3 of each, so it wasn’t exactly a proper trial. The middle seed potatoes in each short row had huge yields and big potatoes: the ones planted on the edge of the bed were smaller and fewer. 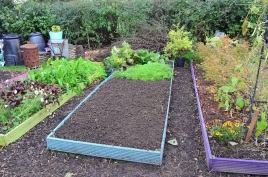 Combined, I have another 8.5kg or so of potatoes. Thanks to nematodes there was no slug damage, but most of the Miras had been tunnelled by, my guess, wireworms or cutworms.  So it’s mash, roasties, soup and anything else I can think of for the foreseeable future. At least the Axonas (pic above) are 90% unblemished and can go into storage.

Fortuitously that created space for next year’s garlic (blue bed). It’s not the best bed for something that grows over winter, what with being mostly in shade from a massive oak, the hedge and my shed. 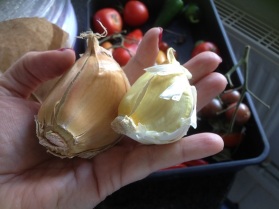 And it meant digging in some phacelia earlier than I’d planned. But #92 has onion white rot and I didn’t want to chance the cloves in a new section there. My seed garlic’s come from the Garlic Farm on the Isle of Wight – this year I’ve gone for hardneck Red Duke and some more elephant garlic to augment what I saved. Their cloves are HUGE. They dwarf the ones I grew and I am giddily anticipating a nice fat harvest. So far I’ve only had to replant one clove – the only issue with using BFB to prep the ground is that foxes think there’s something tasty buried there & start enthusiastic digging.

Most of my squash plants have turned grey and crispy, so, before the local rodents get any ideas I’ve brought the fruits home. My best new fact this year (thank you Steve Mercer!) is that, botanically-speaking, squashes are berries. I’m never going to be able to look at them without thinking…squashberries?

It’s not the best haul, and it’s frankly pants when I consider how many plants and varieties I grew, but it is at least enough to keep us going through winter. There are still at least 3 left on the plot: another Kakai, a Sucrette for the Heritage Seed Library and a Calabaza de Angel a spaghetti-style squash for making jam. The latter not being news to inspire Him Indoors who is sick of seeing the jam pan/jelly bag tripod. Spiralling clockwise from left this year’s squashes are: 2 North Georgia Candy Roasters, Flat White Boer, Thelma Sanders, Kakai (grown for naked pumpkin seeds rather than the flesh), 2 very small Potimarrons, Sweet Dumpling and a slightly warty Sucrette.

Unexpectedly and gloriously, as of Monday I’m harvesting saffron again. Just 2 flowers so far, and not all the corms are up yet. The next 3 or so weeks require daily morning trips to check for more. Here’s hoping not too many of them are are thumping it down. 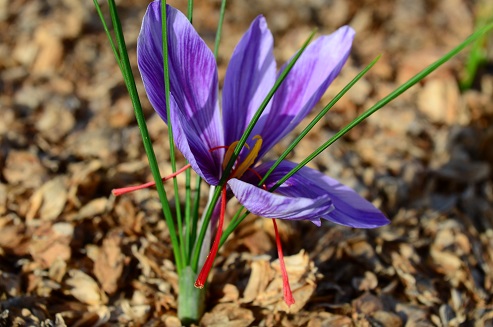