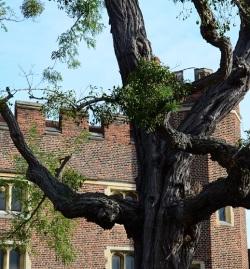 Across the river at Hampton Court, trees wear vast pompoms of mistletoe. Some look to be more mistletoe than tree. Apparently there are 23 varieties alive and kicking in the Palace grounds and neighbouring Bushy & Home Parks. But so far it hasn’t made it over to our side, which I’ve always thought was a pity. 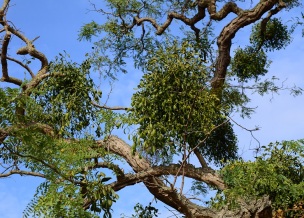 Last March I de-gunked and stuck a whole bag of mistletoe seeds around my plot, courtesy of a very lovely friend who has large, mature plants growing in her garden apples. I chose my victims carefully – my baby apple tree and (with an amount of vicious glee) the blackthorn hedge. Within a few weeks many had been eaten, but the survivors had grown stumpy alien legs, which was very exciting. And that’s when progress appeared to stop. 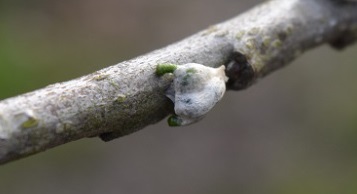 On the surface the nascent seeds have done nothing over the last 18 months except slowly shrivel. There was nothing left of the alien hatchling this summer, bar a little nubbin of leftover ‘leg’. To be honest, I thought it was a goner.

And then, suddenly, there is a small speck of green. Two tiny leaves growing away on the underside of an apple branch.

When more of the blackthorn leaves have dropped, I’ll be squinting through the branches to see if there are signs of life there too.

While I was over at Hampton Court snapping away at the mistletoe and wandering around the kitchen garden, this happened in the sky:

It’s stunning. And I now know it’s called a circumzenithal arc. I have never seen anything like it and I feel so lucky to have seen it. As with all the smaller images on here, if you click on them you’ll see a larger version.