I am really looking forward to another growing season. Rattly envelopes of seeds are arriving thick and fast at Mudandgluts Towers. 2016 has not been the easiest of growing years – many of the plants I grew ended up as slug fodder. But these are some of the varieties which were new to me this year:

Black Hungarian (c. annuum) Dark leaved plants with 2-inch fruits that start green and pretty much immediately turn black. After about 2 months the peppers ripen to a dark jewel-red. They have a lovely rich and fruity flavour, with a good amount of heat. Beautiful plants too – they look similar to Chenzos when black but are open-pollinated so you can save seed. Definitely one to grow again.

Bulgarian Carrot (c.annuum) produces large (3-4 inch) orange pointy chillies which, unsurprisingly, look a bit like carrots. They are fairly hot and have a crisp sweet flavour. The plants are productive – even if you treat them as badly as I tend to you should get a good crop. And it’s nice to grow chillies that aren’t red. They are supposed to be particularly good for roasting or pickling. Also one to grow again, perhaps treating it better than this year and growing in a bigger pot so I don’t inadvertently bonsai it.

Fish (c. annuum) is a stunning pepper and plant, variegated white and green. The variegation is a bit iffy – some plants had plenty, some had nearly none. The same goes for the chillies which eventually turn from green and white to red The transition can make them look a bit muddy – brown seems to be an intermediate colour on the way to red. Given that the amount of variegation isn’t predictable it helps to grow a few and keep the ones that are best. Also its fruits don’t tend to be all the same heat – a bit like the Padrons I grow, some can be fairly mild and others are seriously hot. The tradition is that the chillies are used when green in fish dishes.

Orange Wonder (c. annuum) produces hot, pointy, thin chilies that grow in large clusters rather than singly and sit upright above the foliage, which makes them really pretty plants. While they are lovely, the chillies are a little small, and I’m not much of a fan of small chillies. Might try them again to see whether a bigger pot and the occasional dab of feed helps create bigger fruits. 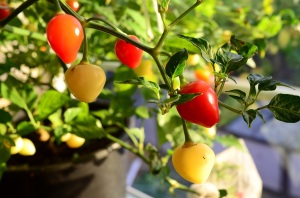 Trepadeira Werner (c. baccatum) is one of my absolute favourites. I got the seeds from a seed circle and I put them back into as many as I can. The plants grow up to 2 feet high, with arching branches bearing single flowers at the stem nodes, which means the fruits are evenly distributed and make a lovely display.

The chillies begin as white, in a triangular shape, and stay white for most of the season. They are fairly fiery when white, but towards the end of the season they turn orange and then through to a bright red, at which point they are very hot!

2016 was particularly unkind to my squash plants, with slugs now munching the baby fruits if I don’t protect them in netting bags till they are big enough to repell them. I’m hoping next year this section will be bigger.

Kakai (c. pepo) is grown for the hull-less squash seeds, rather than the flesh, which is pretty unpalatable. I cooked & ate it so you don’t have to…The squashes are green, ripening through to a striped green and orange. On my limited trial the seed size depends on the size of the squash – smaller seeds are in the smaller squashes.

The seeds themselves are delicious, but I only had 53 intact seeds from my largest. Based on that scant harvest I don’t think that I’d bother growing them again. I’d be interested to hear from anyone else who’s grown them to see if this was a 2016 blip or not.

North Georgia Candy Roaster (c. maxima) are meant to be smaller versions of candy roasters, but they are still pretty big! The vines weren’t huge and the fruits are pinky-orange, banana-shaped with a green end.

They are easy to get into, unlike some of the squashes you need a cleaver for. Inside they have thick flesh, which is smooth and has a lovely almost sweet potato flavour. I used one to make this Maple Pumpkin Flan for Thanksgiving, which is essentially a pumpkin pie flavoured creme caramel. Interesting, and probably to be repeated some day. There’s one left, and that’s destined to go with a savoury dish.

Sucrette (c. pepo) produces yellow, semi-warted squashes on really long vines. The squashes are on the smaller size, up to a kilo in weight, thick-fleshed, non-fibrous and sweet – lovely things! Seeds originally from Heritage Seed Library and being saved as part of the Seed Guardian scheme for their collection. I can see myself growing this often, even if I don’t need to save the seeds for HSL.

Blaby Special (cordon) is a very rare salad tomato with a lovely story behind it. My seeds came from a seed circle. The salad-sized tomatoes tasted just fine, but it was a poor producer with one of the plants showing early leaf blight – from which it recovered, thankfully. It was grown in the colder north-east corner of the greenhouse and suffered a bit there. If I grow it again it needs a bit more care – possibly with a good dollop of well-rotted manure which was said to be the secret of the original tomato’s excellent flavour. Health & Vigour 7/10
Taste 7/10
Will I grow again? Probably, just to give it a chance of a better review given the lengths someone went to bring it back into circulation.

Berkeley Tie-Dye (cordon) were this year’s surprise favourite. They are beautiful salad tomatoes, dark reddy/brown in colour and with gorgeous green stripes. They are unusual to look at and taste wonderful with a deep tomato flavour. Seeds came originally from Thomas Etty, who has a fabulous catalogue. The plant wasn’t hugely productive, but I will definitely be growing these again for their flavour. Health & Vigour 8/10
Taste 10/10
Will I grow again? Yes.

Burpee’s Jubilee (cordon) came to me from a seed circle and is a stable cross of Tangerine and Rutgers tomatoes. The plants are fairly squat, although they are cordons. Mine only got to about 4ft high in the greenhouse, whereas the others got to about 8ft. That does impact yields, so don’t expect to be overwhelmed by tomatoes. The tomatoes are a bright orange, big and solid, with sweet not acid taste. They go really well in salads and sauces. Given their lovely flavour and the issues in my greenhouse this year they will get another chance. Health & Vigour 6/10
Taste 8/10
Will I grow again? Yes.

Kenilworth King George (cordon) came from a seed circle and are an old heirloom variety that used to be in catalogues but now seems only to be available through seed swaps. It’s an incredibly productive cordon, once it gets going, with huge trusses of about 15 salad tomatoes each. I had about 7 full trusses set before the weather started getting colder. The tomatoes themselves have a nice sweet flavour. Health & Vigour 7/10
Taste 7/10
Will I grow again? Probably.

Red Buffalo Horn (cordon) also came from a seed circle and I can’t find anywhere that sells them. They are worth seeking out though for the meaty, large tomatoes they produce. The plants are very feathery and spindly-looking and its fruits seem to vary a lot in size. They are, as the name suggests, horn-shaped, looking a lot like long sweet peppers. The fruits don’t have many seeds in them at all, which makes them an awkward variety for seed-saving. Lovely strong tomato taste. Health & Vigour 7/10
Taste 8/10
Will I grow again? Yes, definitely.

Sosulka Oranzheraya or Orange Icicle (cordon) is another spindly plant but with huge trusses of bright orange, elongated tomatoes.

Each has a little teat on the end, which looks a little unusual but is typical of all the Icicle varieties. Originally bred in the Ukraine, it’s a very strong grower in my greenhouse and sideshoots appear almost overnight. It also recovered really strongly from its slight brush with blight. The taste is not quite as good as Orange Banana to me as I like my tomatoes tart rather than sweet, but this wins out on productivity. Good dehydrated, fresh or made into sauce, but they are quite a sweet tomato. Health & Vigour 7/10
Taste 8/10
Will I grow again? Yes, but perhaps Orange Banana gets another grow first. 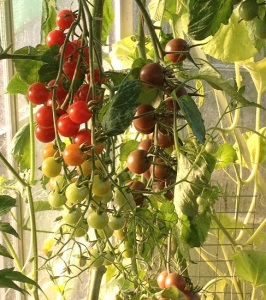 Sweet Aperitif (cordon) like most of my seeds came from a seed circle but they are widely available to buy. The plant turned into an absolute monster, being the first to hit the top of the greenhouse and producing more sweetly tart cherry tomatoes than I could deal with. In the picture the Sweet Aperitif trusses are on the left – Black Cherry are on the right. I do really like these – the trusses are very generous, the tomatoes have a great flavour. The only issue is that, like the Sosulka, they throw out sideshoots at an incredible rate. Health & Vigour 8/10
Taste 8/10
Will I grow again? Yes.

Of the other varieties new to me in 2016, Paul Robeson only produced tiny tomatoes before dying, Marvel Striped had what I think is fusarium wilt, Principe Borghese, Latah and Sunrise Bumblebee were struck down very early with blight. I think all bush tomato varieties are non-starters for me, so those will be the first to be weeded out in the Great Seed Cull of 2017. Of which more later, when I’ve had a think…