Yesterday was a fabulous day. A training day with Perennial, the charity for whom I’m volunteering at RHS Hampton Court in July. I will be very hard to miss – our staff t-shirts are a blinding dayglo yellow. No fading into the background for us! I’m assured the belisha beacon look is very on-trend… 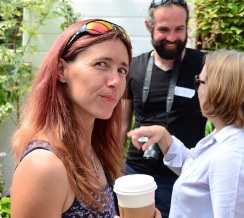 The day was an opportunity to meet the Perennial team, the many other volunteers who will be on the garden or manning the plant crèches, hear from the garden’s designer, Tom Massey, and to see the plants grown for it by Jamie Butterworth and his team. Hortus Loci functions as a retail nursery, but it also grows a huge number of plants for show gardens. This year they grew the plants you may have seen on 11 gardens at the Chelsea Flower Show. A staggering £500,000’s worth of greenery sits in one enormous polytunnel. And they’ve already started on next year’s stock.

Tom Massey’s Sanctuary garden looks like it will be beautiful (click on the link for the press release).

A riotous spiral of ascending plants leading to a sheltered 5 metre-high oasis of green in the middle. It’s designed to reflect the journey Perennial’s clients go on, from chaos and jumble and noise to peace. What I’d failed to grasp is that he was also behind the gold medal-winning UNHCR Border Control garden last year – an amazing evocation of a refugee journey which I found incredibly moving. (Some may know, others don’t – my day job since 2001 has been working with and for refugees in the UK)

The briefing covered lots of the logistics – what to wear, what to expect and how moving through the garden will work. Perennial estimate that about 10,000 people will go through the garden – it will be in batches like the Border Control garden, and I hope that the queues aren’t too long. It also covered the crèches and trade stand – there was something of an Frankie Howerd-esque ‘oooooh’ in the crowd when the votive candle pricing was revealed…The plant crèches are an essential fundraiser for Perennial, and it’s a crazy-busy job so please do donate heftily if you’re leaving stuff with them. That roses have their own category of ticket (there are only 4) made me realise quite how many must be shifted at the show. And how many volunteer arms might get stabbed by thorns!

We had a tour of the nursery with the irrepressible Jamie Butterworth. Photos of him might be a bit blurry as he just doesn’t stand still for long! I hadn’t previously given much thought to where show garden plants come from – but they aren’t whisked out of thin air.

Hortus Loci produces a huge quantity, all grown from tiny plugs. Given the number of approaches they have had for next year’s plants already, this year’s reduced number of gardens at Chelsea was just a blip. The enormous tunnel used for the Chelsea plants was fairly empty but what was described as the ‘sweet shop’ – the sheltered field where designers can pick and choose plants – was full to bursting. Each year the team pick 10 new varieties each to keep the range fresh. I liked very much the fact that they don’t try holding plants back/forcing them too much to create an impossible scene at the shows, daffs with roses or wisteria in June being the examples used, which ordinary growers like me couldn’t hope to have in real life. 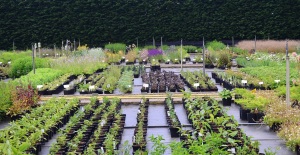 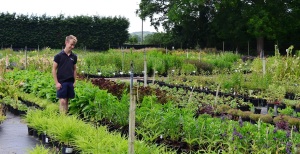 There were lots of questions about feeding and compost. I’ve come away with some Maxi-Crop to try on my squashes and tomatoes – plus it smells lovely. Not usually something I associate with any plant food, but actually true! None of their plants are grown totally peat-free, which I think is a shame given the drive to reduce/remove peat in horticulture and that other nurseries are successfully embracing peat-free growing. Perhaps they’ll find a blend that works for them – at least they are continuing to try. 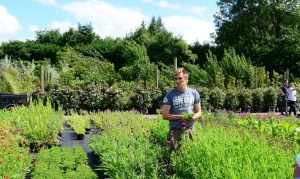 The team pot plugs straight into 3L pots, which I thought was interesting given my book learning on gradually increasing pot-size. Might try that with some things next year. All the plants are going into at least 5.5L deep pots (like the ones roses come in) this week, to give them time to grow a bit more and to provide a slight cushion for the stress of being shifted to an exposed, potentially baking hot new home at Hampton Court. 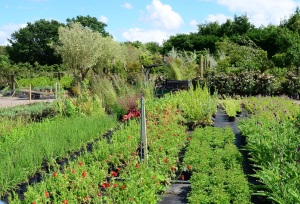 The plants look incredible, and most were obligingly upright despite the very gusty winds that day. There was a huge bay of agapanthus looking just about to burst forth. In about a week or so it would have looked glorious. Tom Massey has his own (large!) pen of plants, and I really need to go through the plant list we’ve given so I don’t give numpty answers at the show!

Thank you so much to the Perennial team for organising the day, to Hobo for some fantastic food and to Tom Massey & Jamie at Hortus Loci for a fascinating tour.

I am really looking forward to the show – and having an exhibitor’s pass apparently means I can get in way before the crowds for a small wander around. Fabulous! (please don’t rain, please don’t rain!)