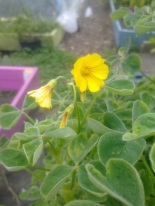 Sped up to the plot after work. There hasn’t been any rain (other than the biblical deluge the night of the Scottish referendum) for a while and the soil is very dry. I watered most things and noticed that the leeks are starting to show rust. Must stop watering from above through the mesh. Hopefully it won’t get bad and it also won’t get on the shallots when they go in. *fingers crossed* Also noticed that some of the oca is flowering.

The trip also revealed a split in my prize Muscat de Provence. It looks a bit like it’s smiling. I’m leaning towards cutting it and taking home, but I’m not quite sure what to do – if I can leave it a bit longer it would help ripen it but I don’t want any beasties to move in. I have brought home the 2 Potimarrons after inspecting the stems and seeing that many woodlice were making their home in them.

On my regular squash rounds I picked the Crown Prince squash on purpose and the 2 Rouge vif squashes by accident – I was trying to move them onto a bit of slab to keep them dry and the stalks snapped.

Both very yellow on the underside, so one is in the cave and one in the shed to see if that will help. They do feel very light compared to the CP and QB – like they are very hollow. The one in the shed has a Queensland Blue to keep it company as I deeply suspect my local woodlice are on a crusade to munch through all stems when they start going corky.

Also picked the last of the climbing borlotti beans, a good big handful of the Trail of Tears beans, umpteen cucumbers and oversize gherkins. The dwarf borlottis have a couple of pairs of true leaves. They aren’t going to do anything useful – next year I should plant out earlier!

Watered the saffron – it’s starting to poke up in the tubs and I am very EXCITED! Something (possibly furry!) is digging in the tubs though. They now have slightly pathetic netting defences.

Had a natter with a plot neighbour and managed to fob some achocha on him – anyone who comes past now is in danger of me leaping out at them with a double handful of the things. I do love them, but I just can’t keep up with how many achochas the plants are chucking out.