Today’s been a bit bleary. I’ve missed every single sky-based event this year thanks to London’s greyness and I didn’t want to miss the lunar eclipse. Both of us crawled out of the flat at about 3ish, and pedaled through freezing mist over to Kingston bridge, tripods and cameras at the ready. We came back 2 hours later, fingers frozen and these are my best shots: 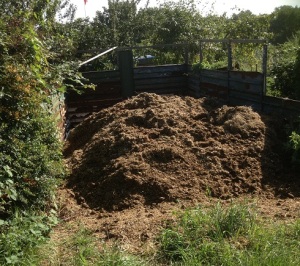 Like last year, the end of September has been glorious. As a ’70s child I’ve had ‘don’t waste the sunshine’ drilled into me, and at the moment I don’t work full-time. So I can drag myself up to the plot for some theoretically easy jobs.

I’ve been putting off dealing with my compost. Partly because the manure bay has been fairly empty, but mostly because it’s really hard work. I have 6 compost bins. They hold a total of 1,600L, which is a fair few wheelbarrow trips to the muck heap and back.

I filled up 4 bins earlier this year. Despite religiously adding in all my kitchen peelings, shredding bills, chopping up nettles, comfrey and old veggie plants, each of those has sunk incredibly quickly. It fills, at most, 2 bins. It makes sense to keep the mature stuff together, so it’s been decanted into the 2 at the end of the row, with a good layer of chopped comfrey to boost the nutrients in it. Ten trips later, the other 4 bins are full of next year’s compost, dug out from the furnace-like centre in the manure bay. In a small wave of masochism I am going to top them up with some more chopped nettles to up the nitrogen content. For which I will need to find the good gloves in the jumble that is my shed.

As a break from shifting steaming hot muck I took out more of the tomato plants in the greenhouse, which means even more tomatoes to process at home.  After a quick fork over those plants have been replaced them with beetroot & spinach seedlings. I’ve also managed to find room for cape gooseberries and most of the chilli pots – some of them are eventually coming home to overwinter. I don’t want to take too many because they always end up covered in aphids. 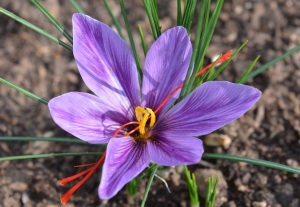 The rain at the beginning of the month has really woken up my saffron. I can’t help counting them each time I visit the plots to see whether they have all made it through their rehoming. It’s a bit obsessive…So far only 4 are missing from the big bed and those in the planters are still waaay behind.

What’s interesting is that the number of shoots coming up tells you how many corms the one bulb is splitting into. The biggest bulbs have 6-7 shoots, which could mean amazing harvests next year. The best thing is that flowering has started, so I need to check & harvest daily, come rain, come shine.