It’s been nearly a week of dull grey skies, thumping rain and temperatures more at home in early April than June, but I think that was just what my plot needed. (I didn’t, I’ve been in bed with Glaswegian bronchitis) The soil’s returned from grudging

concrete into dark, friable loveliness which has been a real joy to plant out into. Sweetcorn, more squashes, cucumbers, and Val’s sweet peas are all out. And I’ve been able to weed easily (though very carefully, particularly around the onions & parsnips!) rather than hacking at weedy lumps of solid clay.

Our local forecast looks much sunnier and more June-like over the weekend, which will be great for our site’s annual tea party, aka Cake Fest. Each year there seems to be even more cake, all of which needs ‘testing’. Elasticated waistbands are a prerequisite. 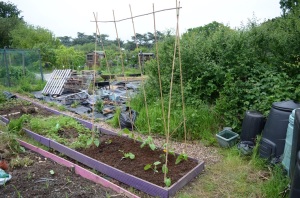 In advance of the sunshine I’ve stuck up a slightly rickety frame for the runner beans ‘Andy Bees’ very kindly gave me (as opposed to Andie who share #92). I’m hoping a bit of bracing at the bottom will keep it in place. From hating runner beans as a child, when they were thick and stringy, I now love them. They have some squashes for company – Flat White and Chirimen. This makes 14 squash plants out and another 10 to go. including the Heritage Seed Library ones. Come Autumn I’ll be handing out squash to all and sundry…!

Very happily, my favourite allotment cat is back. He’d been absent for a few weeks after being chased by one of the foxes, and I was a bit worried. He is absolutely gorgeous, and through the power of a few Dreamies he’s now my new best friend. I’m a bit concerned he’s taken his eye off the ball though – there are some mice living in #100’s shanty corner that he should really be addressing.

The foxes are more than usually visible at the moment. They live in the brambles down by the apiary and this year have cubs. Two of them, which are all fluff and enormous ears at the moment. I’ve switched over to Growmore from BFB for a bit, as they seem fairly keen on digging. The picture on the left has the vixen at the front and one of the cubs under the picnic table. (as with all the pics, click on it for a bigger version)

June seems to mean the start of the ‘end of season’ seed sales. I have so far managed to resist the 50p sale from VegetableSeeds.net though there are a couple of herbs I would quite like. Given that postage is only £1.50 I may well slip up…There is very little to left to sow this year, and that feels a bit weird after such a concentrated few months of seed packet shuffling. All my winter veg has been sown bar salsify and carrots, and the occasional rows of radishes/lettuce/kohlrabi etc can go in direct now.

I have been a bit slack on updating the harvest values for the year. At the moment my spend is up to £303 and the produce value is £45.90, so still very much in the red. Of the spend £233 is on rent and one-off tool purchases (like ratchet loppers and growlights, which are fab but pricey!).

Tomorrow I’m zipping off to Bristol to wander around the Get Growing Garden Trail with some friends. I’ve been told that there will be cake there too…Can’t wait!