I’ve been a bit lax about updating recently. Partly because of the incessant rain, partly because I’d like to make a video update and partly because I’ve had a horrible bug for 3 weeks that just won’t shift and means I have a hacking cough when I talk. Not so good for making a filmed tour of the plots!

There is progress – as ever not as much as I’d like: 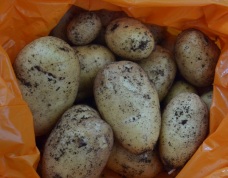 All of my spuds are flowering. I have left Alouette and Sarpo Mira flowers, just to see whether I get an interesting cross as True Potato Seed – something I meant to grow this year but just haven’t had the space for. Next year then…Last week I pulled up Dunluce potatoes I’d been growing in a bag since February. They are lovely spuds, really tasty and take minimal cooking as they are so fresh. Three seed spuds gave just over 2kg of potatoes, which are now being scoffed with lashings of butter and salt. Yum! Blight permitting, in a few weeks I’ll dig up the rest to make room for leeks, swedes, turnips and gilfeather turnips, most of which are growing away slowly on my balcony.

The regular rain is doing wonders for the plots, but particularly for my quince. Usually all the baby fruits have fallen off by now. I am so excited that I might actually get fruit this year! They look fuzzily strokable, but I daren’t touch them as they have so far fallen off like they are on a hair trigger. 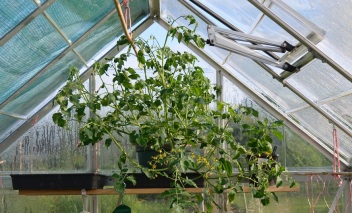 I have created an absolute monster of a tumbling tomato in the greenhouse. It sits in a tray of comfrey water (oh yes, my greenhouse smells just heavenly!) and you can almost see it grow! It has baby 100s & 1000s tomatoes already (compared to most of my other plants, which don’t) and I’ve tied the pot to the greenhouse wall in an attempt to stop it pitching headfirst into the bed below as it gets top-heavy.

Everything else in the greenhouse is behaving nicely. The basil is particularly spicy, and makes for a good snack while I am removing tomato armpits. The Kajari melons look like they are over their transplant shock and are putting on leaves. Fingers very much crossed that this works – I want to save seed from them. This is what the inside of the greenhouse looks like now: 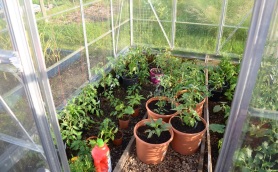 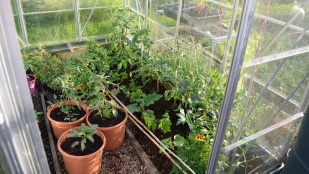 There are still lots of small potted chillies, some kiwano and achocha, all of which need to be potted on or planted out. Down the centre are large pots: a fuchsia I am trying to tempt into flowering, 2 bush tomatoes, a cape gooseberry (overwintered) and a pepino, all doing fairly well.

In fact the only 2 downsides at the moment are the slugs and the incessant rain. I’ve never used so many slug pellets before. They’ve eaten nearly half the squash plants I grew, so I’m down to 13 varieties instead of 20. Though that’s probably for the best…

With the rain I am a bit worried about my saffron corms. They’re dormant now and I really don’t want them to rot in the wet soil. I am debating digging them all up like last year and storing in a bin of damp compost in the garage to also keep them out of mouse-reach.