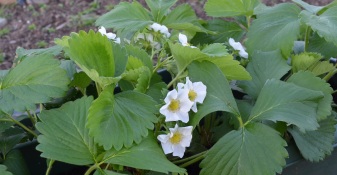 There’s a lot of moving going on. In and out and in and out of the greenhouse and trying not to trip over the door each time. I filled two planters with tiny strawberry runners in early March and they are now flowering and plonked outside, waving at bees. Life in the greenhouse really suited them and they are flying along. They’re sat in a mix of leafmould, compost and BFB, which they also seem to like a lot. I’ve not seen flowers this big on any strawberry plant I’ve grown before. I’m hoping for a handful or two of early strawberries in May. Himself doesn’t need to know about this… 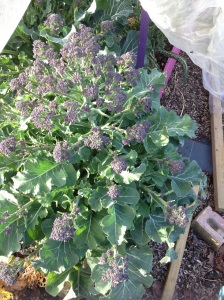 Broad beans are also out of the greenhouse now, after a few days of shuttling to and fro. And the peas should be. I need to plant them out, but that means hoiking out either the PSB or the swedes, both of which are still multitudinous. Swede tops have been a mustardy revelation and we’re eating PSB with nearly every meal and still can’t keep up!

I am behind with many things, because, looming on this weekend’s horizon is Operation Shed Move. For the last week or so, Himself and I have been levelling ground and laying an initial base of slabs (thank you, thank you for those Peter!!). Fortuitously the hedgeside path, the one with the road running through it, needed levelling too and has provided us with heaps of bitumen, stones and clods of clay to stuff under slabs. There has been much mattocking and I am beyond impressed that my tiny 1970s barrow has withstood the strain. It’s not lost on me that, a short 4 years ago, I dug out the ditch I have just painfully backfilled. 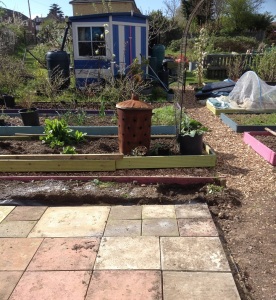 I have pressganged as much rufty-tufty muscle as I can find and will spend Saturday night baking goodies to keep them in a good mood. Because nothing I do is ever simple…The shed can’t go on rollers, because of my raised beds. I am all for taking it apart and rebuilding (needs less muscle) but Himself won’t hear of it. Oh no. We are going to carry the sturdy bleeder. To me that seems fraught with potential calamity. I’m not sure the walls are securely fastened to the floor – I dimly recall that bit being at the tired end of the build and being deemed ‘good enough’. A sentiment that makes me very uneasy now. It will need to rest on the beds for a bit too – I want to fix a floor issue and we need the flags it’s currently sitting on to build a second, higher base in its new home or it might flood in a wet winter. This is when cake will be deployed, to stop our muscle from drifting away… 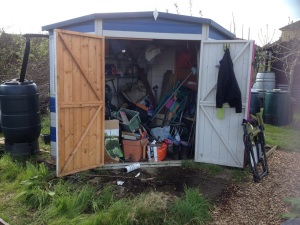 The shed took a full day to clear. It’s a bit embarrassing, but it was so full of stuff (mostly many, many pots) that I couldn’t get into it anymore. I am an expert at luzzing stuff in and legging it at the end of the day’s work. I am promising myself that it will be put back with a quarter of the stuff I was hoarding. And that netting etc will be packed neatly into storage crates. I have no idea what I do with all these pots though. 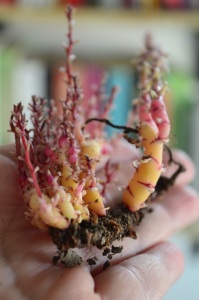 At home I have made a loooong list of crops I need to sow as soon as the shed has travelled. I have also managed to plant oca tubers. Only 5 this year – 2 ‘black’ (via @OcaBreeders) and 3 of my own tubers, though two of those had taken chitting to extreme lengths. I was a bit ashamed to have left them so long, but I bet they’ll be fine. All the tomatoes are now up and sunning themselves under growlights, as well as nearly all the chilli peppers for this year. If they haven’t germinated (Pinocchio’s Nose, Bartlett’s Bonnet, Pasila Bajio – this means you!) I am not bothering with them. I bagged a Zimbabwe Black from the Suttons stall at February’s wonderful Garden Press Event and it is flowering on my windowsill, so that makes up for their non-appearance.

Not everything is going well – one redcurrant has masses of currant blister aphid, none of the red sweetpeas have germinated, my onion seedlings have nearly all keeled over (shallots are bizarrely ok) and 2 of the 3 sprouted yacon tips have also failed. I still have one, and it will be cossetted! 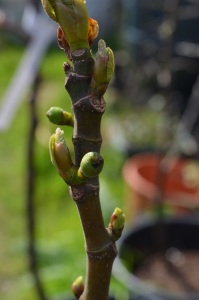 However on the plot I noticed that the figling from last year’s cutting has two figs on it already. TWO! On a barely hatched figlet. The other, older fig doesn’t seem to have considered this as an option, but then I discovered it had been happily rooting itself through the bottom of its pot, so perhaps it was distracted.

In the greenhouse the mulberry flowers have gone all hairy. 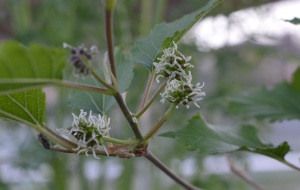 Never having seen one of these before, I googled in a panic. But all is normal. If very small. There are also lily spears and echinacea & dahlias shooting out of pots in the greenhouse – only some pots – dahlias Ripples and Eveline 2 are not playing along yet (how long till I need to worry?), but Dark Butterfly and City of Leiden are romping away. They will soon be joining the regular shuttle in and out.

Wish me luck for the weekend! And should you want to read something else I wrote, here is a guest piece on my obsession with winter squash which was recently published on Andrew O’Brien’s marvellous website, Gardens, Weeds & Words.