Progress is hit and miss

As ever, Mum has been brilliant and watered my stuff. We were up in the Peak District and had much cooler weather. However now I am back I see the weeds are taking over in 2 beds and I will need to spend some time getting them back in order if I am to be able to see my crops.

I have potted on some of the things from the cave, but it is now possibly too late in the year for it to make a major difference. I think that the same will go for the sweetcorn, which is only a foot high and is not looking great. It’s been in for about 3 weeks. The squashes aren’t setting either. The females either aren’t opening their flowers, or aren’t being pollinated if they do. Queensland Blue have sent vines everywhere but only have male flowers. I will have some squash, but nowhere near the amount I thought I would have.

With focusing on the plot structure in the time I have, I have really been too late for most things this year and I think I’ve been a bit optimistic about a plant’s ability to catch up! Mebbe next year will be different.

The dwarf beans are doing really well, as are the tomatoes and chillies. And I think I have an aubergine flower forming. The Charlottes have died back and will come up on the weekend when my nieces are here so they can help with harvesting. I am hoping for a few peas by then too as they have started flowering. As have the achocha – the flowers are tiny. The tendrils have got to the top of the shed and are now making their way around. By the end of the season it might be totally covered!

Am ordering plug plants of PSB because mine is not well. Likewise kale. I don’t know what I have done wrong this time, but I don’t want to do without either this winter.

While we were away I managed to find a lovely family-run nursery up in the peak district and bought a huge jostaberry bush for £10. At that price I am less worried about not liking them… and if it hadn’t been a hire car I would have bought a lot more! 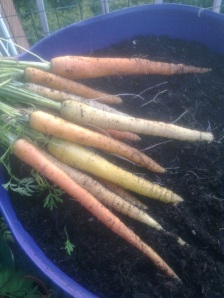 Harvested 4 huge courgettes, a handful of crispy radishes, 2 handfuls of French beans (yellow and purple), the remaining rainbow carrots from the balcony and a massive bouquet of sweet peas. So far I’ve harvested 65.72kg of produce (including mum’s redcurrants), estimated at £235-ish.

Sowed replacement Rainbow carrots in the purple trug and looked at the lettuces and Lemon Drop chillies, which are coming along nicely. I should have spare seed at the end of the season in case the Alberto chillies come to nothing. So far none of the flowers have set.