This week was Committee meeting. Lots of interesting stuff. Including that we have a larger number of vacant plots than normal, so I’ve got to the point of having a chance at a second plot. That’s 3 years’ wait this time rather than my initial 5+ years. I’m not going to attempt to manage the whole thing and will be sharing it with a friend – who’s jumping up and down with possibly even more excitement than me!

We’ve got the choice of 2 near my current plot. Both are essentially blank canvasses and both have a couple more hours sunlight than mine gets in Spring and in Winter. And here my dither begins… 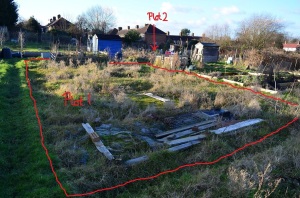 Plot 1 is one over from my plot, on the same side. The pros are it’s very near my plot, flattish, and has been used extensively for about 10 years, though the last year was fallow. One and a half of the beds are covered in carpet, so would probably be ready to go underneath. It’s next to the water tank. But it also has masses of horsetail, docks, some bindweed and couch as well as some moving shade in the day from the neighbour’s fabulous but large shed. And a huge disintegrating compost bin full of horsetail and carpet, all of which would need to be tipped.

Plot 2 is on the other side of the path and 2 plots over from mine. It’s long and thin rather than blocky. The pros are that nearly half of it is nearly ready to go, half of it has never been cultivated so would possibly be in really good nick, it is only partially shaded at the path end by a very small shed and it has no horsetail currently (It’s opposite one that does).

The cons are that half has never been cultivated and is a huge mass of brambles. There is a fair amount of metal that has been dumped there and it seems a little boggier than the other plot. There is probably hardcore road underneath a little of the plot near the path, though actually that would be good for Andie’s shed. It’s equally between 2 water tanks.

I want to use my part of the plot as no-faff overspill from my ‘home’ plot and for things that take up space – squashes, spuds, raspberries (!!!!) and possibly the saffron, strawberries and the odd bean wigwam/spare fruit bush.

In a couple of years we’re likely to move out of the area, so I don’t want to do too much that’s either expensive or permanent. I’ve done enough of that on my plot in my newbie excitement…

Any tips? At this point I cannot decide and may have to resort to flipping a coin!