After a week away in gorgeous Oslo, basking in the sun and swimming in the fjord.

Despite it being colder here than the much more northern there, most of my stuff has put on a massive growth spurt while I was away. My waterers have done brilliantly, and the rain must have been phenomenal – the shed water butt is nearly full again. The local butterflies are loving all the flowers on the plot.

It’s also Weed Central. I spent hours yesterday giving the grass a haircut and pulling out the most obvious weeds on both plots. Plus deadheading flowers and ripping out the cerinthe/honeywort before the seeds go everywhere. Half the plants/seeds are drying upside down in the shed – I should be able to supply the entire site!

Kent Blues peas were dry enough to de-pod. A huge amount of peas were maggoty, but by sheer weight in numbers I seem to have many to save for next year. The bagged nigella pods have also opened up and ‘needed’ shaking out. My DAB radio works on the site and I had Radio4Extra to keep me company. Bliss! 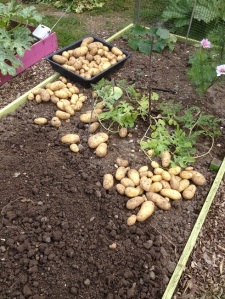 The Charlottes had almost completely died back, which was a week before they should technically have been ready. They are a bit scabby, so I didn’t get the watering right but I am impressed at the amount and how large some of them are – I like them as bakers. I was less impressed at how many were slugged beyond redemption. I even found one with a large orange (now ex-) slug in it. Another had a spear of couch grass growing into it. The offending roots have been ripped out. Note to self – 3 seed spuds to a 1.2m row works better than 4.

One of the watermelons doesn’t seem to be doing anything, so it might just be one melon again this year. It might just be too cold. There are no more flowers showing and the other ones have dropped off. I’ll try shoving some black plastic under the plant to see if that holds the warmth better.

The sweetcorn all have tassles & silks now and the squashes & tomatilloes under the munty frame have got huge. One Berretina Piacentina fruit was the size of a tennis ball a week ago and has trebled in size.  Though it’s obviously been windy. The Spanish beans were at the top of the back and climbing over and are fine. The Lazy Housewife beans have slipped down the twine and look very compressed. Some have what looks like an aphid-transmitted disease, same as the runners last year. I’ve taken off the blistery-looking leaves and hope they will grow through it. For next year I’ll tie some knots in the twine to help stop slippage…

Onions from seed are looking nice and fat, and the celeriac is looking correspondingly awful. I might give up on them – it’s been 3 years of trying. These are bigger than anything I have grown, but have been tunnelled by everything which wants a munch. It’s a bit disheartening, though only a few things have failed this year; failures are usually roots and they’re always because of d*mned slugs!

Down on the other plot most things are going well. One of the Potimarrons has a split/slugged stem and is only kicking out one small squash. Next year plant more! These are one of my favourites. The HSL Black Coco beans are lovely – no blackfly to speak of and loaded with beans. It’s difficult to keep my hands off them. They are flat beans, and I was expecting round ones. Nice and crisp in flavour as young beans (couldn’t quite stop myself munching a couple!).

I couldn’t actually get into the greenhouse! It’s skyhigh with madly flowering tomato plants, which have used the week to sneakily produce sideshoots everywhere. It took a fair bit of judicious pruning and now I can sidle in. Next year I will plant the tomatoes a bit further back and run 2 poles across each side to train the vines up and then across to the apex. And Ildi in a corner somewhere! Nothing is red enough to pick yet, though there are encouraging signs of pinking and yellowing…I do need to tie the 100s&1000s pot to the shelf. With the weight of fruit to come I am a bit worried about it tipping over and falling. Rosa Bianca aubergines are nearly all flowering, which is fab; I really thought I had sown them too late to get anything. The greenhouse is also really wet in the mornings with condensation and I need to get there to open up or resign myself to rampant botrytis later in the year.

The melons and the other squashes are doing ok. One of the growing tips from a Geraumon Martinique looks like it’s been munched/snapped off so fingers crossed another will grow. No female flowers yet.

One of the new rhubarbs (Timperley Early) has shot up while I was away and the leaves are suddenly HUGE. If this is what it intends to do, it is definitely in the wrong place! Will need to see next year and maybe shift it.

Picked loads of the first blackberries for turning into jelly – what I’ve read says the first ones have more pectin than the later ones, so will be better for jamming. I only really need 3 jars of jelly, I’m the only one who eats it.